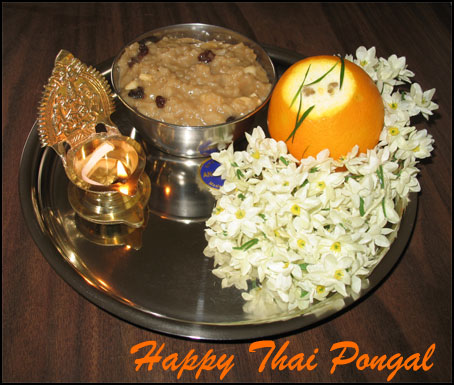 Thai Pongal is the harvest festival celebrated by tamils throughout India and Sri Lanka (nothern part of Sri Lanka).   According to the tamil calendar, January 14th (or 15th) denotes the first day of January.  So according to a tamil saying “தை பிறந்தால் வழி பிறக்கும்” means the comencement of January (தை) paves the way of new opportunities.  Also its  the first day of spring and farmers thank the god surya (sun) for the good harvest.

Pongal is celebrated by making sweet milk rice.  Traditionally in Jaffna, Sri Lanka pongal is made in a new clay pot early in the morning – during sun rise.  Milk is added to the clay pot and when it starts boiling over, uncooked rice is added to the pot and cooked.   When the milk boils over, its considered good luck and brings prosperity in the following year.  Traditionally the pot is placed facing east  when making the pongal (sweet milk rice).   When the rice is cooked Jaggery, raisins, cashew nuts, ghee and cardamom are added.

The day after Thai pongal is called “Maattu Pongal” which means honoring the cattle that worked in the fields with the farmer.  In  Jaffna, Sri Lanka on the Maattu pongal, cows are bathed and their horns are painted.  Then pongal is made for the cows and they are worshiped.